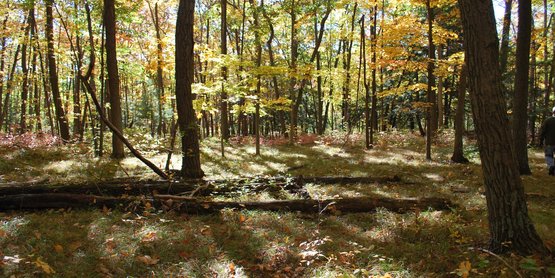 At first glance, NY appears to have healthy woodlands. They appear vigorous and robust. That being said, it’s very important to remember that in order to understand woodlands, you have to think in a forest time frame, which means that you have to think about woodland growth and management over the course of many decades.

Our current mature forests began in the late 1800’s or early to mid 1900’s as agricultural land was abandoned. The forests that we see today, which are 60 to 120 years old, are diverse and productive forests. The large trees that you can see while driving by in your car or when you fly overhead in an airplane are known as the overstory of the forest. The true concern is found within the understory of the forest - the layer of forest from knee to head high. To truly see this understory layer, you have to take a walk through the woods.

The concern for NY woodlands arises when you look at the next generation of forest. As our current forests are harvested or die off, the next generation is predicted by what’s growing in the understory. Today, this understory layer is often composed of very different species from the diverse and productive overstory that is currently being harvested.

There are a number of reasons to be concerned about forest regeneration. First, the mature forests grew with full sunlight associated with abandoned agricultural fields. The regenerating understory does so from small-scale openings which are created when trees are harvested or when trees fall down from weather or natural causes. The removal of these select trees creates an opening within the forest that provides less sunlight than would have been seen in an open field and different, often times less desirable, types of tree species favor less sunlight than those that favor an abundance of sunlight.

Second, the seedlings of mature forests became established and began growing when deer populations were low, almost non-existent in much of NY. Today, there are more than 1,000,000 deer in NY, and Yates County has the highest number of deer per square mile in the state. Today, deer preferentially browse the same tree species that we want to grow in our forests, those that are valuable as forest products as well as wildlife habitat – oak, maple, cherry, pine, spruce to name a few. Deer leave behind the less desirable species that have lesser value to wildlife and people.

Third, mature forests were not exposed to pressures of invasive and interfering plants and destructive insects. Today, there are many common invasive species, including: European buckthorn, multiflora rose, honeysuckle, hemlock woolly adelgid, and emerald ash borer. The forests we try to grow today are subjected to numerous pests which alter their biology and ecology in ways that do not favor the success of common desired species.

It’s important to learn how to manage these regeneration challenges. Nearly fifty percent of Yates County is forested and much of the land is not actively managed according to a forest management plan. Yates County Cornell Cooperative Extension works closely with New York Department of Environmental Conservation (DEC) and the Master Forest Owner (MFO) Program to provide educational workshops and woodswalks addressing these forestry regeneration concerns.

ornell's ForestConnect provides forest owners with educational resources to help them make decisions about the management of their property.

There are no upcoming events